In r-AxSpA, the sacroiliac area shows signs of irritation or may be deformed or fused by the long-term, severe inflammation.

Birth of a new name

The term axial spondyloarthritis (AxSpA) is a relatively new term, having been proposed by doctors in 2012 at the Assessment of Spondyloarthritis International Society (ASAS).

In the past, doctors did not diagnose a patient with ankylosing spondylitis or r-AxSpA unless an X-ray or MRI showed sacroiliitis, or severe inflammation of the bones at the bottom of the spine. The problem was that many patients exhibit all the other symptoms of AS for as long as 10 years before progressing to a more advanced stage of the disease. Some people have AS symptoms but no evidence on imaging tests for their entire life. This is called non-radiographic axial spondyloarthritis.1

Figure 1. The different types of spondyloarthritis 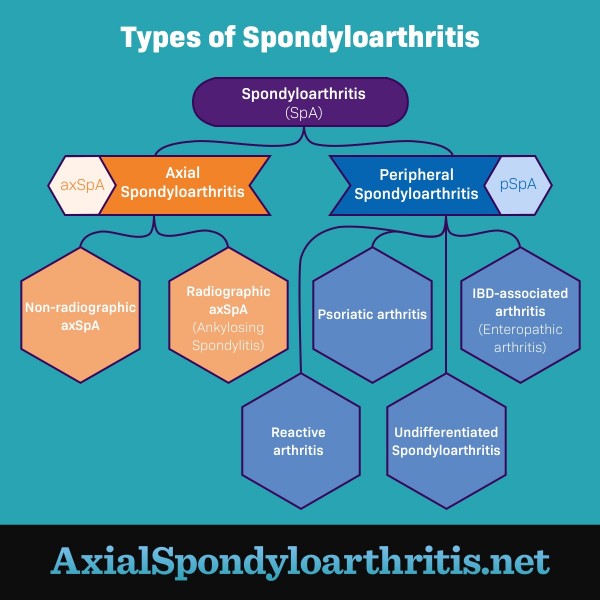 AxSpA is equally common in men and women, compared to AS, which is more common in men. It is most often diagnosed in people in their 30s.3 Studies estimate that as many as 1 percent of adults in the U.S. may have AxSpA, which equates to 2.7 million people.1,5 Like ankylosing spondylitis, more than 90 percent of those diagnosed with AxSpA inherited the disease due to the gene HLA-B27, but as many as 30 genes may be associated with the condition.4

Your doctor will use the same techniques to diagnose AxSpA that are used for AS. This includes:

Periods and Ankylosing Spondylitis: How I Manage