Symptoms associated with spondyloarthritis (SpA) can vary. While some are obviously central to the condition, others may seem unrelated at first. Knowing the range of possible symptoms can help you in letting your health care provider know about any new symptoms. It can also help in getting you appropriate treatment sooner, rather than waiting until they worsen.

Not everyone will have every symptom, and the frequency and severity of symptoms can vary at different points along the AxSpA spectrum, especially as the condition progresses. Awareness of symptoms can help you get treatment earlier, which can help relieve discomfort or pain and improve quality of life. Dactylitis is a characteristic symptom of SpA and identifying it early means you can treat it as soon as possible.

Dactylitis, also referred to as “sausage digit” or “sausage-like digit,” is common in all kinds of SpA. It is especially common in psoriatic arthritis (PsA).1 Like its nickname, dactylitis is when a finger or toe becomes swollen like a sausage. The digit may also be slightly red and have a deformed look to it.2 The person may not be able to bend the affected finger(s) because of the swelling.

Toes are more often affected than fingers, with the second digit being the one affected most commonly.2 Dactylitis is often the first symptom of SpA and more than half of those with dactylitis have the first episode of dactylitis before a diagnosis of SpA is made.2

Figure 1. Sausage digit on a finger 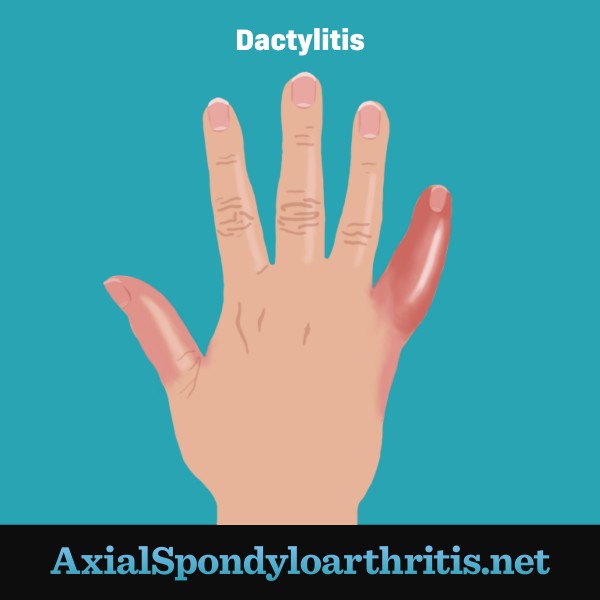 Dactylitis tends to get worse as SpA progresses, even with treatment. This makes early treatment of this symptom important.

The exact cause of dactylitis is still not known. Traditionally, tenosynovitis and soft tissue involvement have been thought to be the cause.2 Tenosynovitis is the inflammation of the fluid-filled tissue that surrounds a tendon. Joint damage due to bone erosion is also thought to be a related cause.

More recent research has also shown that enthesitis is common in those with dactylitis, and that the enthesitis has affected the tendons. The inflammation that occurs, along with friction in the joints from repetitive use, may play a role in dactylitis.2

How dactylitis is treated

Treatment of dactylitis has involved nonsteroidal anti-inflammatory drugs (NSAIDs), disease-modifying antirheumatic drugs (DMARDs), and biologics like TNF (tumor necrosis factor) inhibitors.3 The DMARDs that have been used include: cyclosporine, leflunomide, sulfasalazine, and methotrexate.2 These have not been shown to be as effective as biologics.2 NSAIDs are usually the first-line treatment, and for those whose dactylitis does not respond, biologic or small molecule drugs should be used.

Your doctor can go over the different drugs with you and which one may be most effective for your situation, if applicable.

If you have dactylitis, this is treatable. Your doctor can examine your digits and if necessary, order an imaging test to get a better look at any joint damage. Together, you and your health care provider can decide on appropriate treatment so that your symptoms can be relieved and perhaps even slow down progressive damage to the joints.